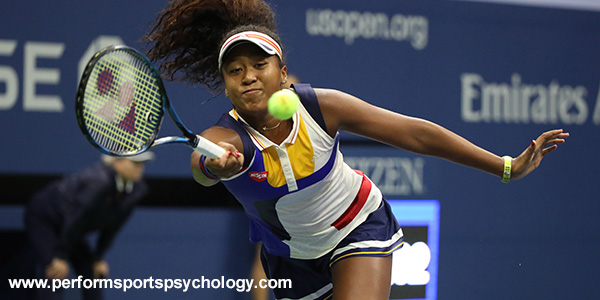 Sometimes, tennis is a battle of wills, while other times, matches are a battle over nerves…

The inability to manage your “nerves” can be the difference between winning and losing… raising your game to the next level or being stuck in a performance slump… accomplishing your goals or continually falling short of achieving your dreams.

You often hear some athletes talk about being a “nervous-wreck”.

Excessive nerves are like a wrecking ball that can demolish your performance.

Excessive nerves result in a host of negative consequences for tennis players:

It is critical to learn how to win the battle over your nerves, if you are to have a personally rewarding career in tennis.

The women’s final at Indian Wells, 2018 BNP Paribas Open was truly a battle over nerves.

No. 44 Naomi Osaka faced No. 19 Daria Kasatkina in a matchup of 20-year-old rising stars. Osaka’s road to the Finals included victories over two-time winner Maria Sharapova, No. 5 Karolina Pliskova and top-ranked Simona Halep during the two-week tournament. Kasatkina’s tournament run was comprised of wins over U.S. Open winner Sloane Stephens, No. 2 Caroline Wozniacki, No. 10 Angelique Kerber and No. 8 Venus Williams.

In the end, Osaka soundly defeated Kasatkina, 6-3, 6-2 in just 70 minutes for the first title of her career vaulting Osaka to No. 22 in the WTA Tour rankings. For her efforts, Kasatkina will move up eight spots to No. 11.

In their post-match interviews, it was quite telling as to the difference-maker in the match. Osaka was focused on calm, even though she was nervous, while Kasatkina was never really able to quell that sense of nervousness.

OSAKA: “I was extremely stressed and extremely nervous but my plan was to, like, fake that I’m very calm.”

KASATKINA: “I think we were both nervous at the beginning, because the biggest finals so far but during the match she was able to manage her nerves and stuff, and I was still a little bit tight.”

EVERT: “[Osaka] is still building her game. It’s a process; she doesn’t have everything yet. I was very impressed when she came on the scene, how young she was, she had a lot of power, a big serve, big groundstroke game. I’ve seen a lot of improvement over the past year in terms of her fitness, and I know she’s working on the mental side of her game and on confidence, but I think that will come with more experience on the tour.”

Everyone, not just you, gets nervousness during BIG matches.

The key is to maintain an optimal range of edginess that fuels your play on the court.

By working on the mental side of YOUR game, you can learn effective management strategies, just like Osaka, to help you win the battle over your nerves.

Tardio Tip: Winning the Battle Over Your Nerves

Osaka used her “fake that I’m calm” strategy to push her over the top in the most stressful match of her life.

Follow Osaka’s lead and “act as if you were calm”.

Keep your shoulders back, head high and breathe deep.

Tell yourself, “I am calm and ready.”

Watch videos of Osaka and mimic her body language.

With a little practice, you can win the battle over your nerves and launch your play to greater heights.