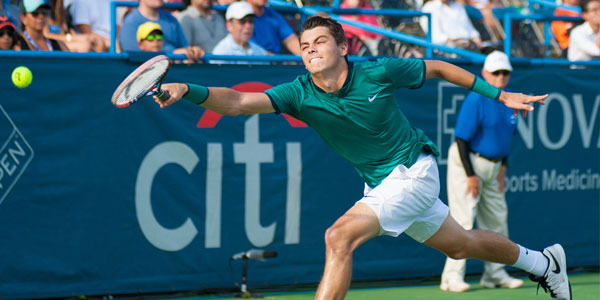 Do you dream abound about being the next “big thing”?  Do you dream of playing in top tournaments and moving up in the rankings?

Unfortunately, many players never get to the next level leaving them frustrated, dejected, demoralized, disenchanted and often quit the sport at an early age.

Why do some players flourish in the sport while many others flounder?

3 Major Reasons Tennis players Do Not Reach the Next Level:

Climbing the ladder has more to do with mindset than ability.

18 year old Taylor Fritz, a promising young professional, made it to the final in just his third ATP event at the Memphis Open in 2016. Fritz’s appearance in the final is an amazing feat considering it took Novak Djokovic 24 tournaments and Roger Federer 21 events before they made their first finals.

Fritz was ranked No 1 as a junior and named the 2015 ITF Junior World Champion. Fritz has steadily climbed the ATP rankings, ranked No 937 a year ago, 145th at the start of the Memphis Open and 102nd after his appearance in the final. Today, the 18 yr. old Fritz holds an ATP world ranking of 69.

How has Fritz been able to raise his level of play?

Obviously Fritz has the talent and powerful strokes, but his competitive mindset has been his greatest weapon. Fritz knows if he focuses on further developing his game and ignoring outside distractions that the results will come.

FRITZ: “I always say this [finals] is reassuring to know that I’m doing the right thing and I’m on the right track. But got to just keep doing my own thing and not let all the milestones get in your head or anything like that… I always say, I do this for myself; I want to improve for myself. The only person I feel I can let down is myself. “

You may have relied on your natural ability in the past but you need to grow in your mental game if you want to successfully climb the ranks in tennis.

As the competition becomes tougher, you will also need to become mentally tougher.

By adopting a mindset like Fritz, you can successfully face the challenges at the next level:

Tardio Tips: Mentally Tough Mindset for Reaching the Next Level

Want to learn more about Achieving your Goals: Do you Have a A Gold Medal Goal Plan?

Parents: It’s not as easy as it seems: Sports Parenting: The Toughest Game of All The Benefits of Letting your Kids Fail