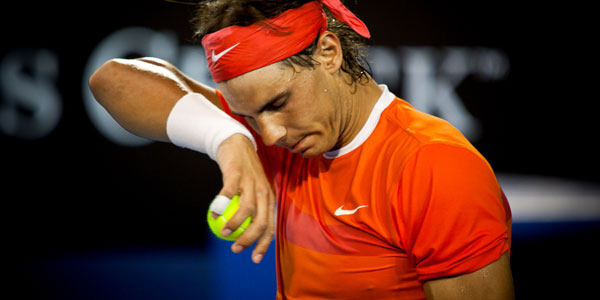 Matches are, often, won or lost even before you set foot on the court. Mental demons, such as self-doubt, can be devastating to a tennis player’s confidence.

During warm-ups, you may have noticed how talented your opponent was… Your anxiety steadily increased throughout the match… You just couldn’t find your rhythm… you felt sluggish as if you were playing the match in mud… As your opponent racked up points, your confidence bottomed out… Instead of fighting for points, you couldn’t wait until the end of the match.

Self-doubts cause you to play from a position of fear, generate a tremendous amount of anxiety, eat away at your confidence, erode your motivation and ruin your match performance the more you buy into those self-doubts.

What would you do if a random spectator yelled at you, “You STINK at tennis!”

Would you passively buy into their opinion, become dejected and give up on yourself? Probably not… You would probably get pretty angry and have some “choice words” for them or get into a heated debate about their ill-mannered judgment.

If you wouldn’t take that negative barrage from someone else, why would you do that very thing to yourself?

Buying into self-doubt is a destructive behavior. It is also one that you can exert a great deal of control over.

Every tennis player experiences some amount of self-doubt before a match. It is quite normal to have some degree of doubt about an uncertain future outcome. Optimal performance requires that you don’t give in, buy in or focus on that doubt.

Rafael Nadal has struggled with injury, form, drop in ranking and a slump in performance over the past year. All of these issues have contributed to the self-doubts Nadal has admittedly experienced this year. The 2015 season is the first in the last 11 years that Nadal did not win a Grand Slam tournament.

Nadal confessed that self-doubts have negatively affected his aggressiveness on the court.

NADAL: “But the sport for me is simple, no? If you are playing with less confidence and you are hitting balls without creating the damage on the opponent that I believe I should do, then they have the possibility to attack.”

Despite his early loss in the 2015 U.S. Open, Nadal feels his mental game is improving.

“My mind allows me to fight until the end. It’s something that I was missing for a while.. [As] for the nerves, for the anxiety that I had for a long time this season, I was not able to [fight]. I was not able to be fight the way that I was fighting today. So it is an improvement for me.”

You cannot passively give into self-doubts and play aggressively simultaneously. If you can remind yourself to keep up the fight, your efforts on the court will be better served.

Just like Nadal, if you can commit to playing aggressively, be patient and go for shots, your confidence will rebound opening the door for playing your best tennis.